From 1836 to 2020: Worthington and the work toward racial justice

Written by David Robinson on June 22, 2020. Posted in Uncategorized

On Monday, June 15, your City Council passed a Resolution, focused on issues of racism and racial equity, that I believe is significant and that I hope will pass the test of time.  The text of the final draft, a product of serious reflection and dialog by all Council members, may be read in full here (and is pasted directly below at the bottom of this post): https://worthington.org/DocumentCenter/View/6627/Resolution-No-27-2020-As-Amended—ImpactsCondemning-Racism-and-Promote-Racial-Equity?bidId=

The Resolution is a statement of both values and intended actions.  The values are essential to state, clearly and unequivocally.  And, adequate to a public document of this nature, we did so.  But it will be the actions that render the statement of values authentic, and not hollow.

Notably, from my perspective, Council has committed, in Section 4, that “the City of Worthington will undertake a review of relevant… policies and practices… and will report findings, and needed actions and changes to City Council and the community” (and, in Section 7, that “City Council… will develop an action plan…”).  In fulfilling these pledges, though I am committed to the Resolution’s broader objective of “promoting racial equity,” I do not want to lose focus on the presenting issue of law enforcement practices.  I particularly want to examine not only our use-of-force and duty-to-intervene policies, but also our mutual aid agreement with the Columbus Police Department.  I want to acknowledge that this agreement routinely operates to the benefit of both jurisdictions during normal law enforcement operations.  However, this agreement was the mechanism whereby Worthington’s own police officers participated, albeit in a peripheral function (traffic control), in support of the recent CPD operations during the recent protests downtown.  Choosing my words carefully, I would say the conduct of the CPD was disturbing and wholly reprehensible in many instances in response to these protests.  Worthington’s support of the CPD actions, even indirectly, is something we ought to deliberate upon as a community, and determine whether this is something we would choose to do again.  I realize the issue of mutual aid agreements is complex with multiple layers of implications, and is not to be approached lightly.  Nonetheless, I believe that your elected officials should discuss what protocols should be in place if, in the future, the actions of one or more participating police departments in an ongoing operation is judged to be unacceptable and not compatible with our own police department’s values, policies, and practices. I will be pressing city staff and Council leadership to include this issue in future public deliberations.

I stated early in this post that I hope that our recent Resolution will stand the test of time.  I say this in a spirit of sober optimism, recognizing that here in Worthington, citizens have fought for racial justice since our founding over two centuries ago, and although obvious and profound progress has been realized in our nation, the recurring calls for basic racial equity, then and now, reveal the long-term nature of the underlying struggle.

Notably, our city formed its own Worthington Anti-Slavery Society in 1836.  The fact that the 66 signers (24 of whom were women) of the group’s constitution included two village council trustees and other prominent names in our city’s history indicates that this group was mainstream in Worthington. The group’s mission was not only the immediate abolition of slavery, but also, as a precursor to our current calls for racial equity, “the emancipation of the colored man from the oppression of public sentiment and unjust laws and the elevation of both [slaves and free blacks] to an intellectual and moral equality with whites.”  The meeting minutes may be read here: https://ohiomemory.org/digital/collection/siebert/id/3288/

A year later, the Worthington Anti-Slavery Society made explicit the political implications of their values and commitment to social change: “We pledge ourselves to support no Man for any office in these United States who is publickly opposed to the Immortal sentiment set forth in the declaration of our Independence, Viz, That All Men  are created Equal,  That they are endowed by their Creator with certain inalienable Rights; that among these are Life Liberty & the pursuit of happiness.”

I want to thank Kate LaLonde, Director of the Worthington Historical Society (http://worthingtonhistory.org/), for providing me with references to our abolitionist history, which I only touched upon in this post.  Here is a further reference for those interested, provided by Kate: “The best description of the Anti-Slavery Society’s formation can be found in the New Englanders on the Ohio Frontier book by the McCormicks on page 217 – 218. You can view the google book here:  https://books.google.com/books?id=24ZSmJFbXAEC&pg=PA218&lpg=PA218&dq=worthington+ohio+anti-slavery+society&source=bl&ots=hLqIomUlgQ&sig=ACfU3U0znqMDkxr6ttcePEc3zLRctXYIlA&hl=en&sa=X&ved=2ahUKEwi76bXY74PqAhV4SzABHSGDAQ8Q6AEwCHoECAkQAQ#v=onepage&q=worthington%20ohio%20anti-slavery%20society&f=false

And  for those interested in exploring what the City of Worthington is currently doing and saying about these issues, there are multiple resources online:

And, lastly, my earlier post on this topic: https://davidrobinsonblog.com/2020/06/council-resolution-on-racism-june-2020/

Recognizing the Impacts of Racism, Condemning Racism in All Forms, and Committing to Promote Racial Equity. 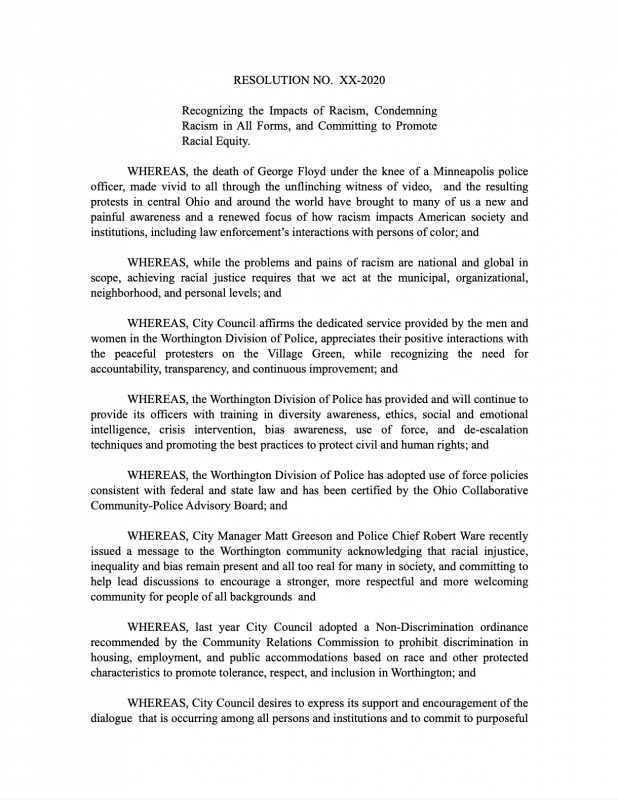 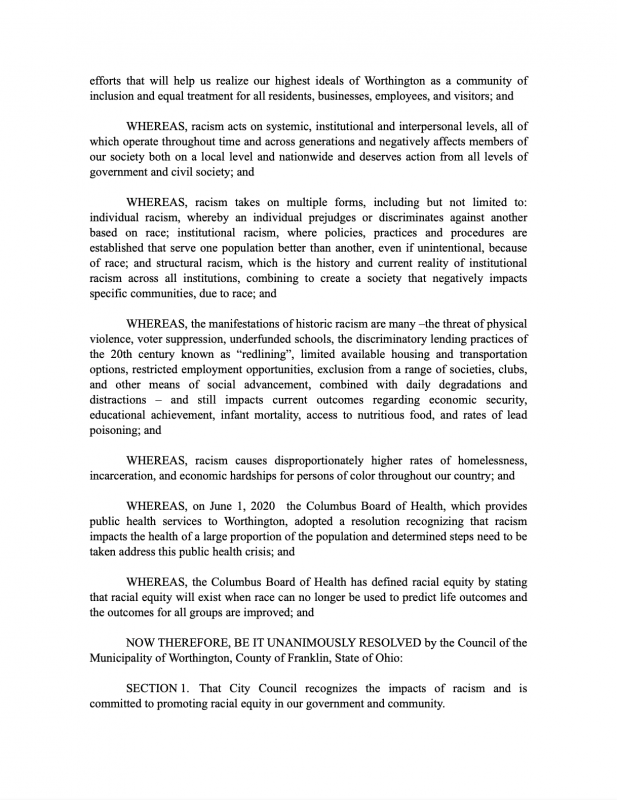 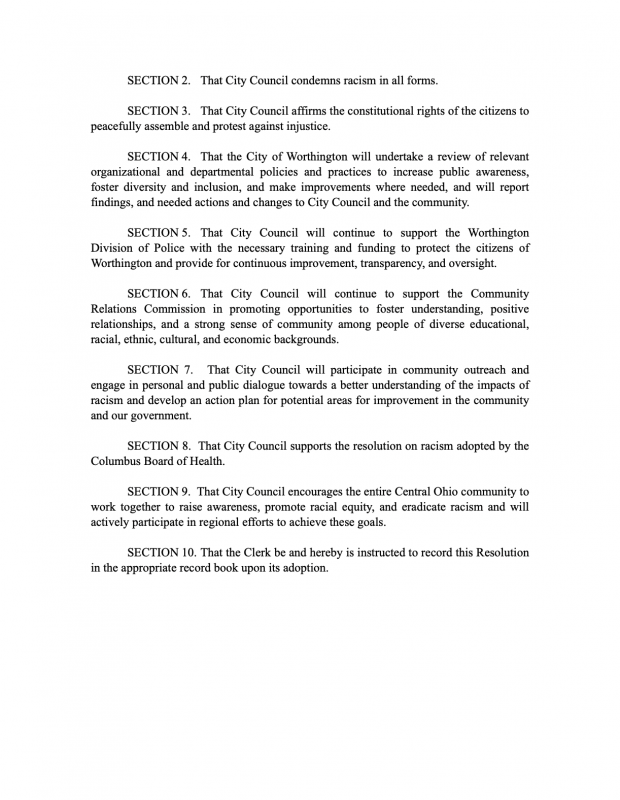 David Robinson lives in Worthington with his wife, Lorraine, and their three children who attend Otterbein University and Colonial Hills Elementary. David is President and co-owner of Marcy Adhesives, Inc., a local manufacturing company. David has served on Worthington City Council since January, 2018, and is deeply committed to 1) advancing resident-centered policies, 2) supporting responsible development that enhances our unique historic character, 3) endorsing environmentally sustainable practices for both residents and city operations, 4) promoting the safety and well-being of all residents, and 5) preserving the family-friendly nature of our neighborhoods.