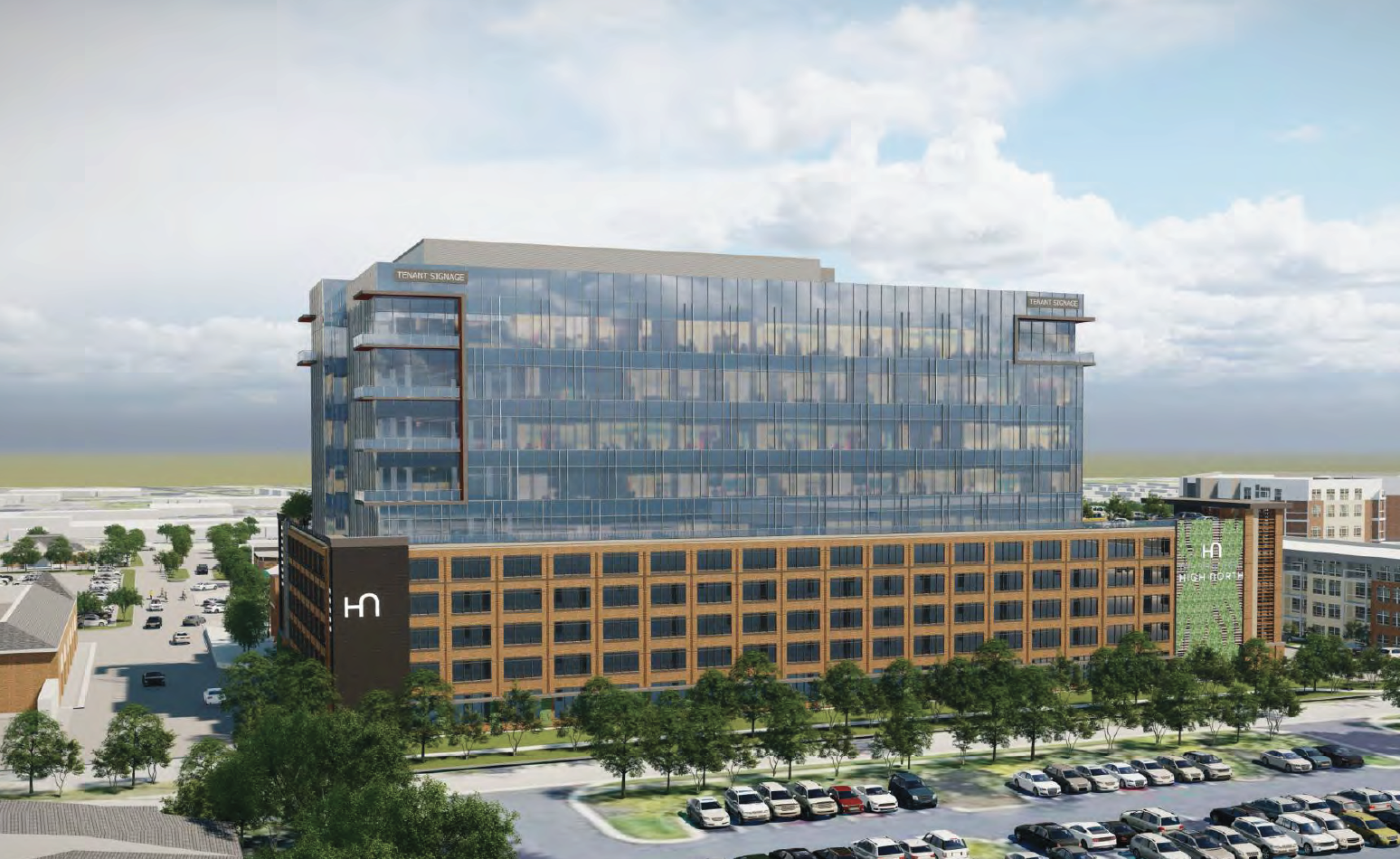 While Worthington and the world have been contending with covid for the last year, private developers and city staff have been busy planning and reviewing multiple proposed projects throughout our city, from north to south, both large and small.  These projects, many months and years in the making, stand to benefit us all, not only in the form of increased income tax revenues to support city services, but also in the form of increased dining, entertainment, and leisure opportunities.  Here are a few highlights, moving from north to south along the High St. corridor, of notable developments that will start to manifest this year.

The final vision for this project is a downsized but revitalized mall, the addition of dining/retail amenities, immediately adjacent to newly-constructed, substantial (200,000 sf) Class A office space, set within a more pleasing, pedestrian-friendly streetscape and smoother traffic flows, all at the nexus of the most important commercial corridor in Worthington (over half of the city’s income tax revenue comes from the Wilson Bridge Road corridor).  The image above shows a view of this project’s Phase 1 office building, looking south, from 270 (note Kroger’s on the left, and The Heights on the right).

The positive ripple effects of this project, both east and west on Wilson Bridge Rd., are hard to overstate in support of the city’s long-term financial vitality (the High North project itself, if fully realized, will yield ≈ $1.5-2.0+ million/year in city revenue).  The introduction of Class A office space into our commercial inventory will likely make the entire Wilson Bridge Rd. corridor more attractive to additional reinvestment dollars (currently, the city has just 20,000 sf of Class A office space, in the nearby Heights building), as will the new, supporting dining/entertainment amenities.

The project is conceived in two phases (see image below), with the first phase seeing construction of a 100,000-125,000 sf, 8-10 story office building (4-5 stories of office built atop a 4-5 story structured parking deck), two attached restaurants, and the (partial) demolition, renovation, and opening of existing mall space.  The second phase envisions another 100,000 sf of Class A office space, closer to Wilson Bridge Rd., with a maximum height of 6 stories (and a maximum of 4 stories within 100’ of Wilson Bridge Rd.).  Importantly, commencement of both phases is dependent upon pre-leasing 40%+ of the space, so the exact timing for both phases is contingent.  For details, you can see the development proposal here (the visuals begin on pg. 94): https://www.worthington.org/ArchiveCenter/ViewFile/Item/3741. Council will be discussing and likely voting on this project on April 19. 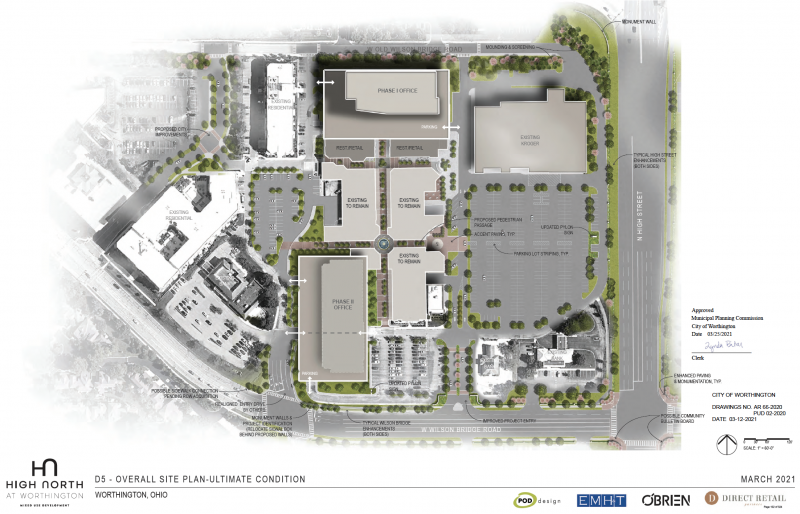 And below is another view of the High North project, looking toward the northwest, from somewhere high above the corner of High St. and Wilson Bridge Rd.) 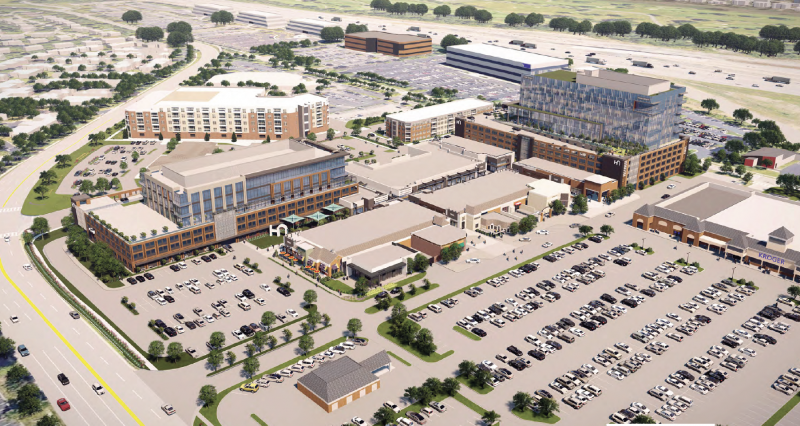 Some may object that a project of this scope and buildings of this size are not suitable for Worthington.  However, the way I think of development is that the desirability and appropriateness of any project, whether large or small, is very site-specific.  What is suitable in one location may be entirely unacceptable just blocks away.  What may make sense in other communities could be terribly inappropriate in Worthington.  It all depends on the location and context.  In this instance, as I see it, an eight story building is only conceivable in Worthington along the northern side of Wilson Bridge Road, abutting and visible from 270.  I believe that the northern side of Wilson Bridge Rd. is exactly where we ought to be doing this.  If done appropriately in that location, a large, Class A office project will serve us well, embracing new, forward-thinking opportunities, without sacrificing or degrading the character and fabric of our neighborhoods.  We can do both: develop our economic vitality and protect the uniqueness of our city.  Preserving the distinctive character of Worthington—the basic reason that businesses locate here—is in fact the best economic development policy.

There are two basic components to this project: a four story mixed-use office building in the center of the property, and a series of four buildings, one and two stories, abutting Wilson Bridge Rd. itself.  The four story building is expected to have one or two retail venues/restaurants on the first floor, about 25,000 square feet of Class A office on floors 2-3, and a “boutique” hotel on the 4th floor (with 15-20 rooms).  The Wilson Bridge Rd. buildings, facing north, will house a mix of retail/restaurants and office.  These are expected to complement well the High North office development across the street, with ingress and egress on to Wilson Bridge Rd. positively aligned with the mall.  See the approved proposal here: https://www.worthington.org/665/Worthington-Gateway 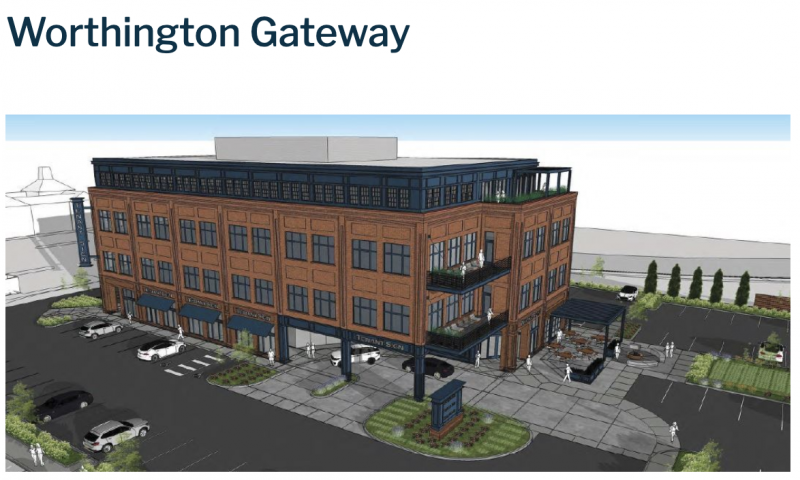 As many readers may know, the Anthem building (leasable space of 200,000+ sf) used to be a major contributor to the city’s tax base.  Peak employment there provided over 800 jobs.  Following years of reduced operations, Anthem moved outside of Worthington to smaller facilities, and the building was purchased in the summer of 2018 by Lawyers Development Corporation (notably, they also own and operate the LeVeque tower in downtown Columbus).  Since then, the new owners have invested in both internal and external improvements, and are now pursuing a multi-tenant strategy.  The big news here is that they have succeeded in securing the first tenant, modest in size, but hopefully a harbinger of multiple additional signings in the near future.  Details are expected to be publicly released soon.  Importantly, this first signing indicates a long-term commitment to the existing building and its commercial use, which I believe is a very good thing. 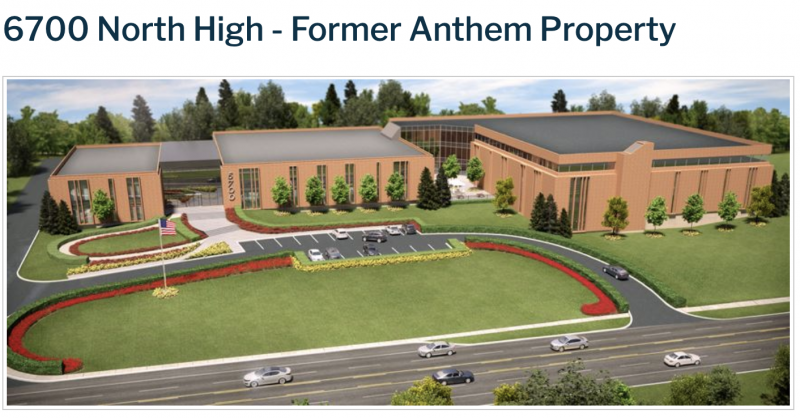 Last but certainly not least, the old Bruegger’s Bagels location at the southern edge of the historic district will soon be the new site for Chapala, a Mexican street food restaurant.  For those of us who have been clamoring for tacos (this includes my eight year old son), this is a major moment.  The grand opening is slated for mid-summer.  See you there…