Written by David Robinson on May 8, 2020. Posted in City Council, Ethics

A little over two weeks ago, Ohio Attorney General Dave Yost filed a legal complaint against City Council Member Doug Smith, alleging misuse of charitable funds.  The complaint alleged that “Smith’s actions were willful, wanton, and in reckless disregard of the legal rights of the charitable beneficiaries of MHR [charitable entity].”  Smith has responded by saying the allegations are “not true,” and “I intend to work through the court process, as this is a civil matter containing accusations, not facts.”  Since the filing of the complaint, I have received two direct requests from the public, independent from one another as far as I can tell, asking that I join them in calling for Smith’s resignation from Council.  One of these requests was received by email, sent to the whole of Council, while the second, a hardcopy letter delivered via USPS, was written and sent specifically to me.

The letter sent directly to me asserted that “A member of City Council should not be in a position to have been alleged to inappropriately and unlawfully convert an organization’s resources to their own use.”  The letter then broadened its claims, stating that since I had sent a letter to the public last fall about campaign finance, in order to be consistent, I now needed to call for Smith’s resignation (“In fidelity to the principle espoused in your letter from the 2019 campaign, you must now demand the resignation of Councilman Smith.”).  My response to this letter is pasted directly below.  The key sentence is probably this: “Forcing the resignation of elected officials on the basis of allegations alone—no matter how certain the charges may appear—would for me set an unwelcome and dangerous precedent.”  And below this letter, as reference, I have attached my public letter from the fall of 2019.

I share this in the spirit of transparency, which, in this case, refers not to actions, but to judgments and the values and principles underlying them.  I trust the public to make its own judgments, whether agreeing or not with my own thinking, when so informed.

Comments and criticisms are welcome at davidwrobinsonblog@gmail.com

I received your letter early last week and have now had a chance to give it a thorough read.  Here are my thoughts: 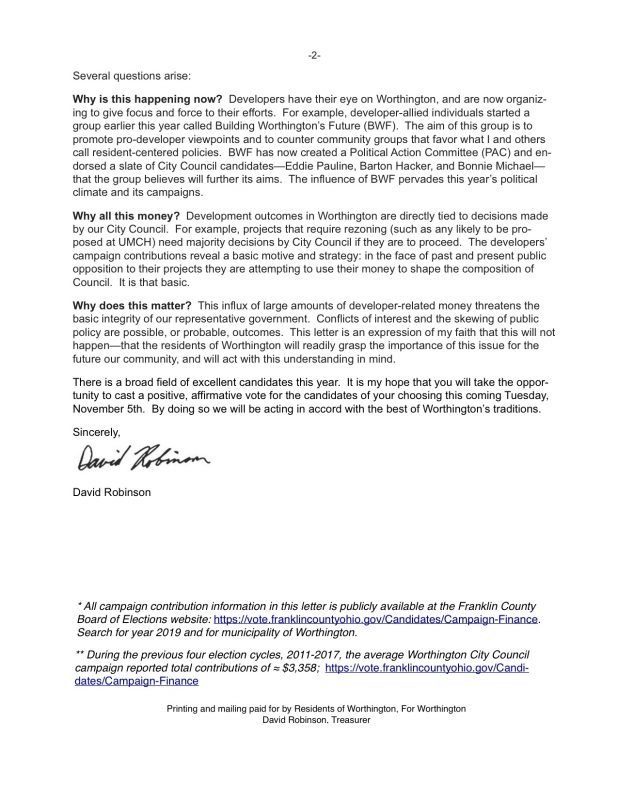