Money in Our Politics: Part 2

Written by David Robinson on February 6, 2020. Posted in City Council 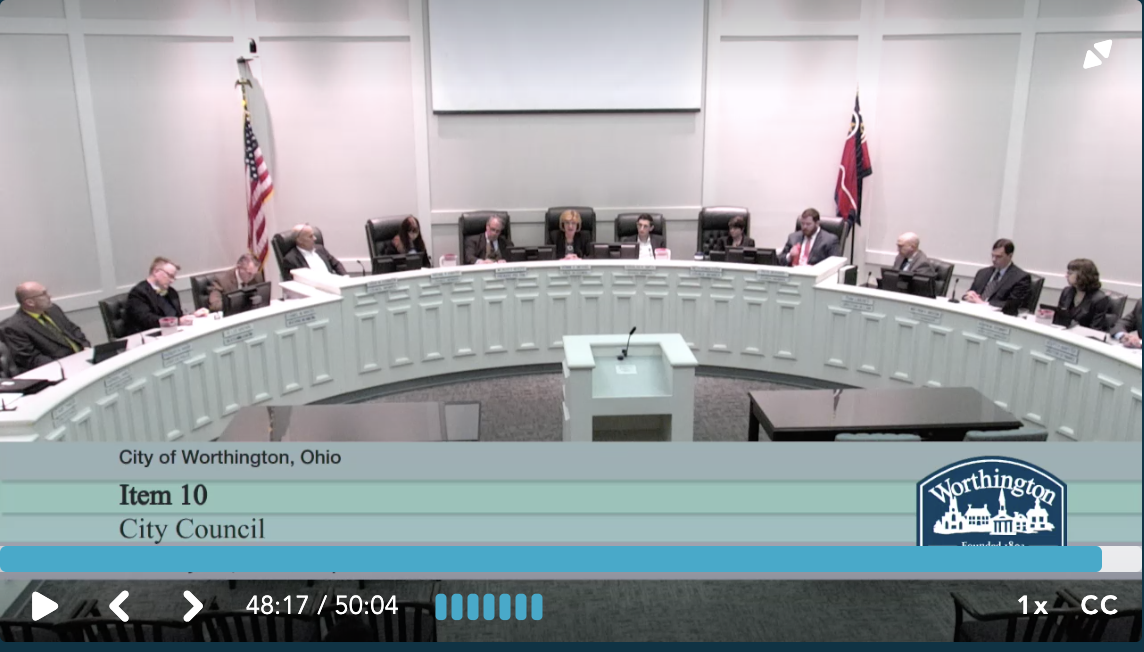 At Monday night’s Council meeting I requested that Council President Bonnie Michael recuse herself from the upcoming discussion and vote on the NCR proposal at Stafford Village, due to the fact that she accepted a significant campaign contribution ($750) from the CEO of NCR during last year’s election.  Unfortunately, she declined.

To me, the issue of money in our politics—and its possible impact not only on subsequent public policy but on the public’s underlying trust in their government —is a very serious issue.  Last October, I wrote to the public about an unprecedented influx of developer-related money in to our local elections for Council (https://davidrobinsonblog.com/2019/10/open-letter-to-the-public-unprecedented-in-the-history-of-worthington-an-influx-of-large-amounts-of-developer-related-money/).  This blog post represents what I call “Part 2” of this unfolding issue.  My remarks to Council, and my earlier email to Bonnie, are pasted directly below.  And if the reader wishes to watch the video of both my remarks (starting at ≈ 40.28) and Bonnie’s reply at the Council meeting (starting at ≈ 46:18), it can be accessed here: http://worthingtonoh.new.swagit.com/videos/39938

I would welcome feedback on this issue from any interested reader (davidwrobinsonblog@gmail.com).  As I said, I believe money in politics is a serious issue that permeates and warps the character of our governmental systems that we know, now more than ever, cannot be taken for granted.  I believe the public is right to expect standards of conduct from their elected officials that instill positive trust, rather than merely avoiding what is illegal.

“I have attempted to successfully address this issue directly, one on one, with Council Member Michael, but to no avail.  So I now bring it before you, our mutual colleagues on Council, and before the public at large.  I wish I didn’t have to do so, as I believe the right thing should have been done reflexively as a matter of simple public ethics—but it has not.

The issue I speak of, the principle at stake, relates to money in politics, and whether, here in Worthington, Members of City Council and candidates for Council, should accept money for their political campaigns when offered by persons with business before the city—business that requires Council approval—and whether, if such money is accepted that recusal by the Council Member should be standard protocol when the donating person or entity brings their business before City Council.

This recusal of elected officials, when conflicts of interest arise is, to me, basic to ensuring public trust in their local government.  And I would add that in our nation today—and that means here as well—that maintaining (or recovering, as it may be) public confidence in the integrity of governmental institutions is of highest importance.  It’s the foundation of the life we hold dear.

Now it is public knowledge—from a This Week newspaper article, as well from as a statement by a resident at the last MPC meeting—that during the recent election Council Member Michael accepted a large campaign contribution—$750—from the Chief Executive Officer of National Church Residences, which—on May 15th when the money was given—had the current proposal for Stafford Village before the city, the very same project proposal that was just formally introduced for consideration by this Council.

I know that regarding this matter Council Member Michael has said—and may well say again tonight—that this financial contribution to her campaign for public office does not affect her thinking or judgement on the matter.

But such self-referential statements by public officials are really beside the point when it comes to public ethics.  No one can know what is in another person’s heart and mind, which is exactly why public ethical standards have been created and are needed in the first place.  And though we can’t read minds, what we all do know is the verifiable facts: that a large financial contribution from the CEO of a development company was offered and accepted by an elected public official, and that this company is now seeking, and needs, city approval in order to accomplish its aims in Worthington.  Those are the public facts, available to all.

Therefore, in order to preserve the trust of Worthington residents in the integrity of their local government—that it operates entirely in the public interest—recusal by Council Member Michael from the upcoming discussion and vote on the Stafford Village proposal, due to the conflict of interest that has been created by the giving and taking of the contribution, is the only responsible course of action.

In closing, if this giving and taking of money from a person—with direct financial interest in a Council decision—to a City Council Member does not represent a conflict of interest requiring recusal, then what would?  This precedent should not be allowed to begin its infectious work here in Worthington.

I therefore ask you, Council Member Michael, believing we should not lower the bar for what is permissible here in Worthington, and that it is a basic responsibility of ours to the public, that you formally declare your recusal from the impending discussion and vote on the NCR Stafford Village proposal.  Will you do so?”

I’m writing with reluctance and regret, but with a sense of necessity.   Because of the significant campaign contribution you accepted last year from Mr. Ricketts (CEO of NCR), I’m writing to urge you to recuse yourself from the upcoming Council discussion and eventual vote on the NCR proposal for Stafford Village.

To me the issue is very straightforward: in order to maintain public trust in the integrity of our local government, elected officials need to avoid any perception of conflict of interest—where personal gain intersects with public duties.  Your acceptance of the donation creates that conflict and, for those aware of it, the perception.

I know you have made personal claims of impartiality about this matter (in the This Week article), but that is not adequate when it comes to public service.  It is external actions and facts—available and verifiable to all—that matter.  And the basic fact is that you personally, politically benefitted from a significant contribution ($750) given by someone with business before the city—business that requires Council approval for it to proceed.

You know all this—you’ve been on Council for decades.  Recusal is the only appropriate recourse.  To not do so would establish a destructive precedent that, in my mind, would be indefensible before the public. So I urge you, please, to do this for the immediate and long-term good of our city.

I look forward to your reply, and hope it will be an affirmation of your decision to recuse. Thank you.