Written by David Robinson on November 6, 2019. Posted in City Council 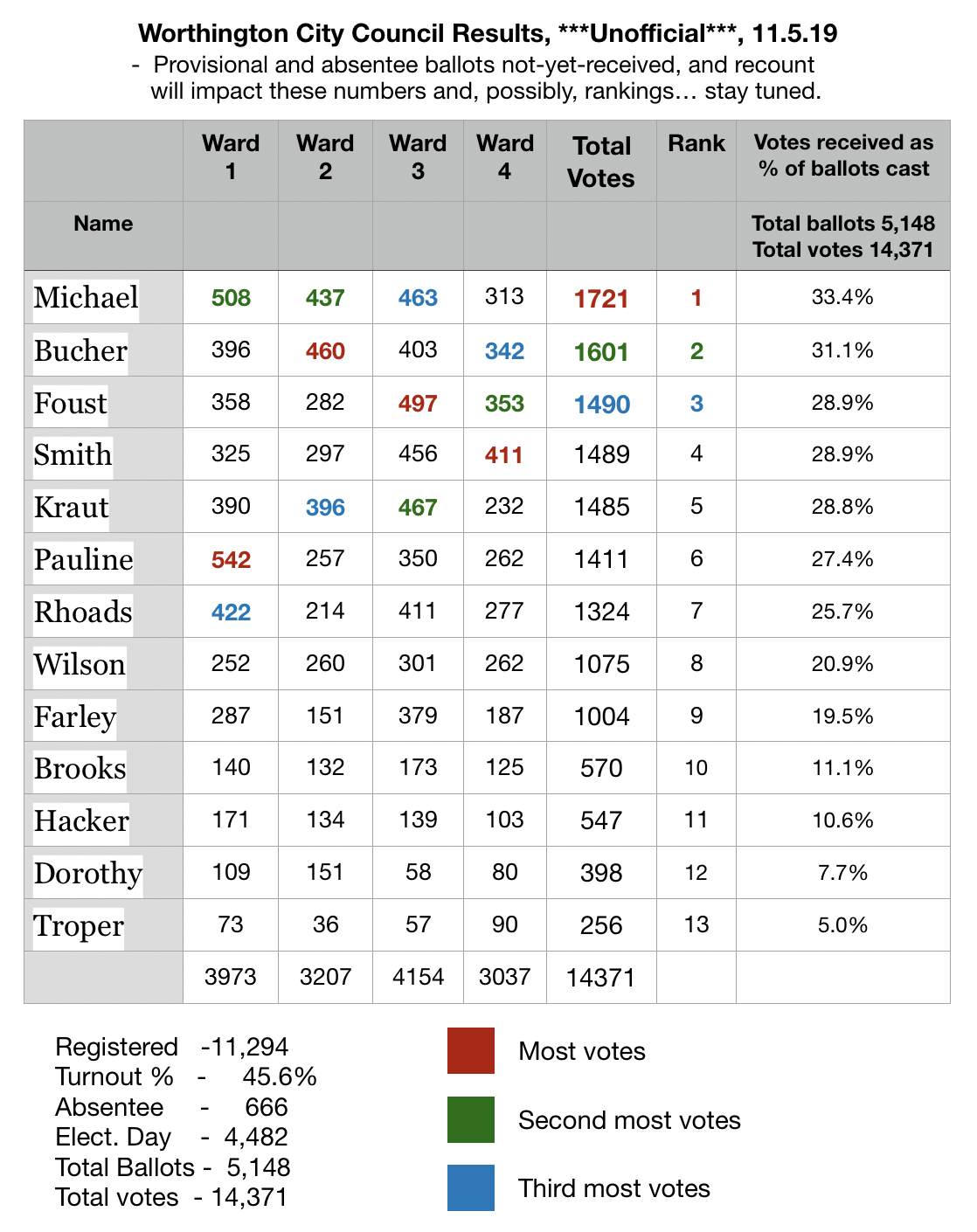 Due to the razor thin vote margins determining the third seat on City Council, I stopped by the Board of Elections (BOE) this morning to ask about when and how the final vote for City Council will be certified and finally made official (the results in the above chart are “Unofficial”).  What follows are my notes from conversations I had with several staff members at the BOE.  I welcome commentary and correction if any of my understanding of BOE procedures is wrong or incomplete.  This post is intended to clarify, not confuse.

In sum, because the vote totals were so close between Foust/Smith/Kraut, there will be an automatic recount to determine the outcome for the third seat.  Before the recount can take place, however, provisional ballots and additional absentee ballots will need to be counted, and then the vote formally certified (projected to take place around the 22nd of November, but no later than the statutory deadline of the 26th).  Once certified, a mandated ten day waiting period precedes the recount.  This means that the recount will not take place until early December (probably the first week).  My notes below provide further details.  Again, I welcome critique or added information.

(One note about the data in the chart: the far right column, what I labelled “Votes received as % of ballots cast,” may be confusing.  Because each voter could vote for three candidates in this pooled election, if we look at the number of votes a candidate received and compare that to Total votes cast, it creates the impression that the number of voters who supported them is far less than is actually the case.  The Board of Elections and This Week both use this type of calculation in their presentations, which I don’t think is helpful.  It seems to me that what really matters is what portion of the voting public cast their vote for any given candidate.  For example, Bonnie Michael has next to her vote total on the BOE site an “11.98%.”  More meaningful to me is the fact that of the 5,148 persons casting ballots, 1,721 of them cast a vote for her, or 33.4%.  Hope that makes sense).

• State law mandates an automatic recount if the difference in vote totals amounts to less than 0.5%.  As the chart above indicates, determining the outcome for the third City Council seat—where the vote totals for Foust/Smith/Kraut are just five votes apart—is going to require a recount.

• But first things first.  There are two groups of ballots that need to be counted and added to unofficial totals outlined above: 1) Provisional ballots cast the day of the election (if someone didn’t have an ID, a name had changed, or someone was possibly at the wrong polling station, etc.); countywide there were ≈ 2,500 provisional ballots cast yesterday, and 2) Absentee ballots postmarked by the end of the day Monday, 11.4.19, but not yet received as of 11.5.19 (this may include overseas mail, often from the military, but may also be domestic mail delayed for a variety of reasons).  By law the BOE must allow ten days from election day for any remaining absentee ballots to be received.

• Once provisionals and post-election day absentees are counted, the BOE is able to commence with certifying the results.  I was told that certification is likely to take place this cycle sometime between 11.22.19 and the statutory deadline of 11.26.19.

• The auto-recount will be scheduled to take place ten days after certification (by law it cannot take place sooner, presumably to allow for any legal actions or any preparations by the involved campaigns).

•The Worthington recount will be fairly expeditious, because modest in scope, and would likely take one day to complete.  Campaigns directly involved in the recount are allowed to send an observer representative (as are the political parties).  Application forms are available at the BOE.

• If a tie exists after the first recount, a second recount is conducted.  If the tie persists, then a coin is tossed to serve as tie-breaker.

I hope these remarks and above data are useful.  Stay tuned…