History, Far and Near 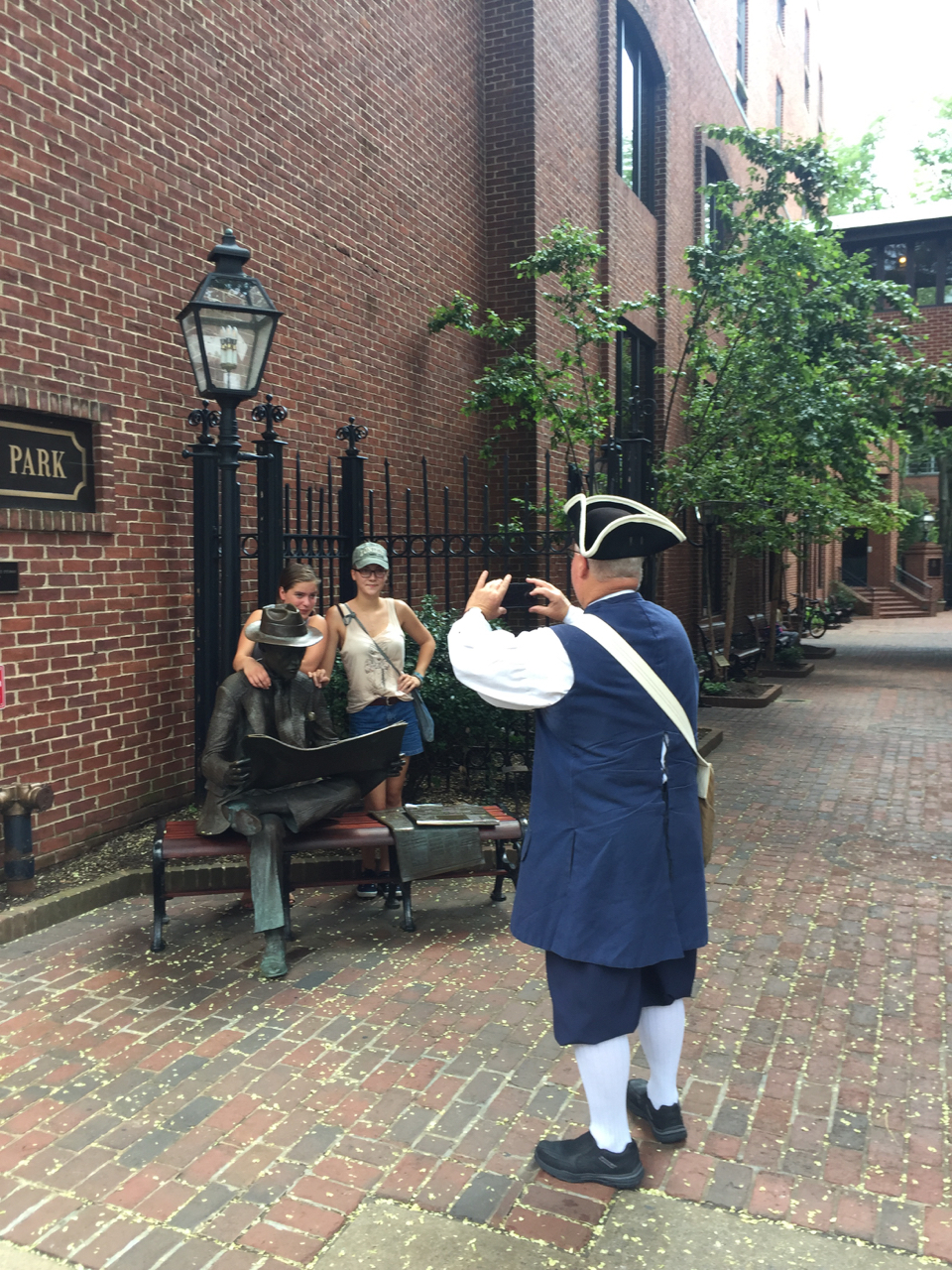 Dear Reader, having just returned from a roadtrip in southeastern Pennsylvania with my wife, Lorraine, this post is a bit different than those prior, in both content and form. It is not textual commentary about current events in Worthington, but is instead comprised primarily of images of historic places elsewhere. But my purpose here is not to suffer the reading public with a modern-day version of the family vacation slide show.  No, I have selected the pictures below with an eye toward possible relevance for our own community, its past and its future.

As we encountered these historic sites, from a slightly earlier stratum than that of our own Worthington—some of the places humble and out-of-the-way, some grand and central—I found it intriguing to see how others engage their own proximate histories, and to consider which practices of theirs might we benefit from if we decide to further honor, affirm, and celebrate the history we have in our own midst.

Perhaps you share my experience of encountering residents of other central Ohio communities (and, yes, even in Worthington too) who have little or no idea that Worthington dates back to the Age of Jefferson, that we have a proud history of supporting Abolitionism, and over two centuries of civic commitment to libraries and literacy, a wide array of public institutions, commercial inventiveness, and so on.

To me, this limited public awareness of our forebears and the extraordinary lives they lived is a missed opportunity, not only to “market” our city but, more importantly, for us, the residents of Worthington, to better understand the deep roots of our identity so that we not unwittingly lose it in our ever-changing world.

The pictures below were taken August 6-8, as Lorraine and I travelled through southeastern Pennsylvania.

One day in Lancaster, PA, was not enough. Their history is broad and deep, in terms of both persons and events (https://en.wikipedia.org/wiki/Lancaster,_Pennsylvania), and their current commitment to promoting their history is well developed. While I do not suggest equivalence between them and us, I do believe that we, here in Ohio, might benefit from employing, in our own style and scale, some of their ideas.

HIS PRINCIPLES LIVE ON—

Upon arriving in town, we asked a gentleman for directions. Before he could answer, we told him we were interested in history, hoping he would give us an idea or two, redirecting our path. And he did. He suggested we walk a few blocks to see the gravesite of Thaddeus Stevens (https://en.wikipedia.org/wiki/Thaddeus_Stevens), located in an otherwise modest, even potter’s graveyard. The short walk was well worth it, as the inscription on his tomb elevated our thoughts for the day: 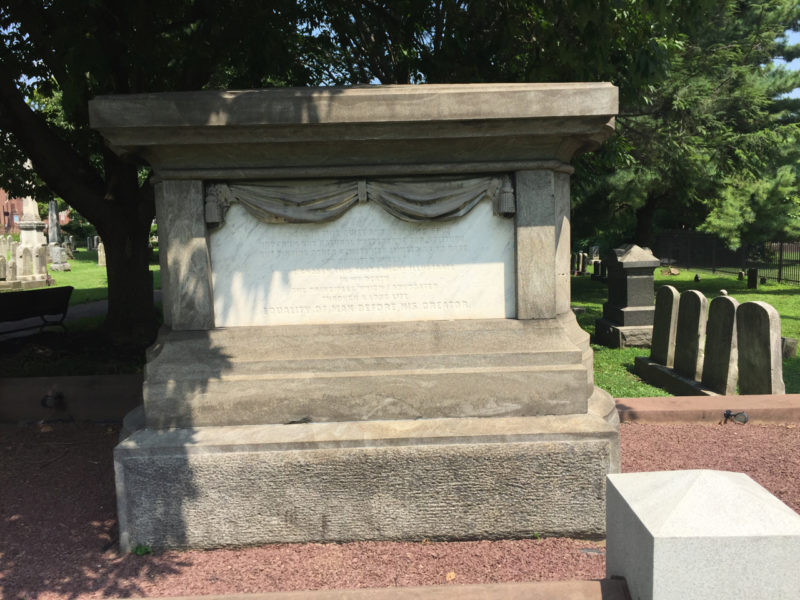 Inscription on Tomb of Thaddeus Stevens:

I repose in this quiet and secluded spot—Not from any natural preference for solitude—But, finding other Cemeteries limited as to Race by Charter Rules—I have chosen this that I might illustrate in my death—The Principles which I advocated through a long life—EQUALITY OF MAN BEFORE HIS CREATOR

Are there local notables reposing at St. John’s, Walnut Grove, and Flint Union, and what did they say and do?  Might we appropriately acknowledge and learn from them?

NOT ALL IS LOST—

Lancaster, like Worthington, has lost buildings of significant worth, but the city now physically honors the places and the vanished buildings, thereby providing a double lesson for us today. 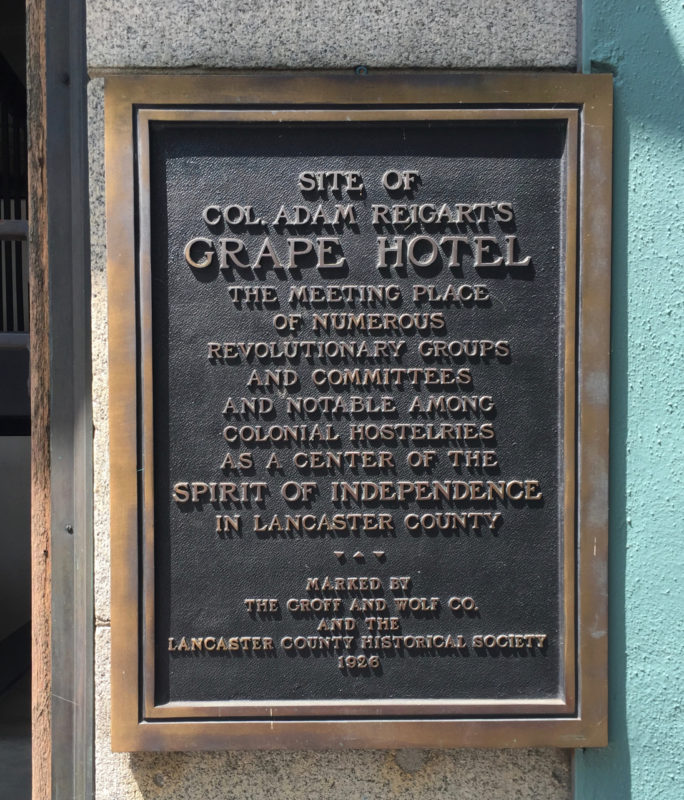 A SIMPLE REMINDER OF PERSONS AND PLACE—

Might we further identify, in simple and unobtrusive ways, places of significance? 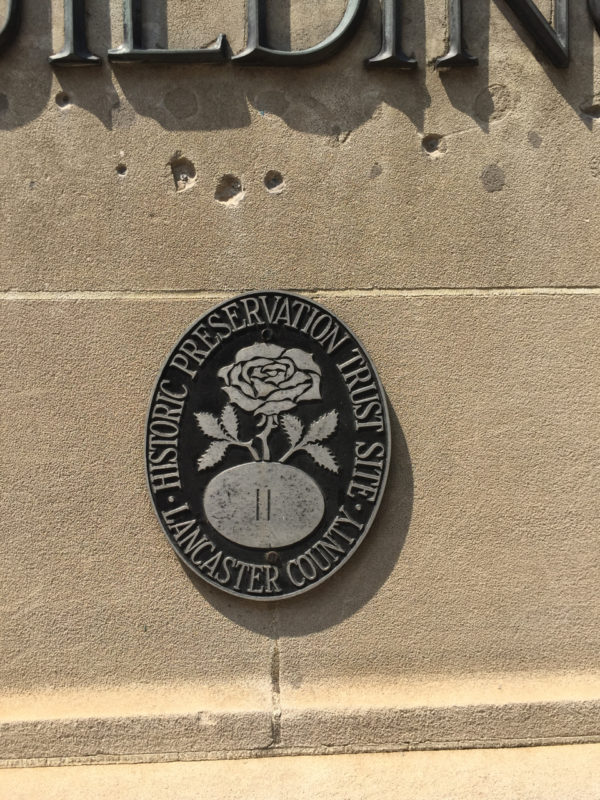 AND IF WE HAVE A STORY TO TELL…

Perhaps there are places in town that warrant a greater narrative? 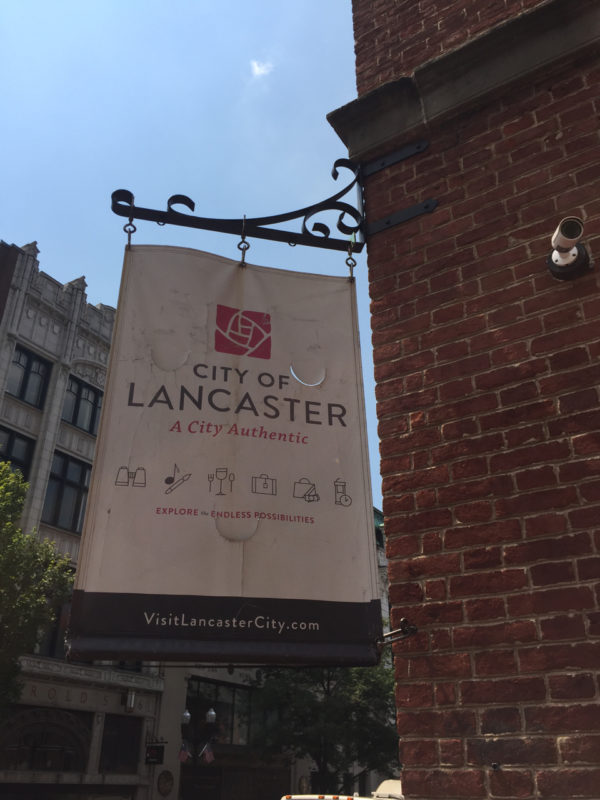 A POCKET PARK: Simple, small, unexpected; place-making at its best— 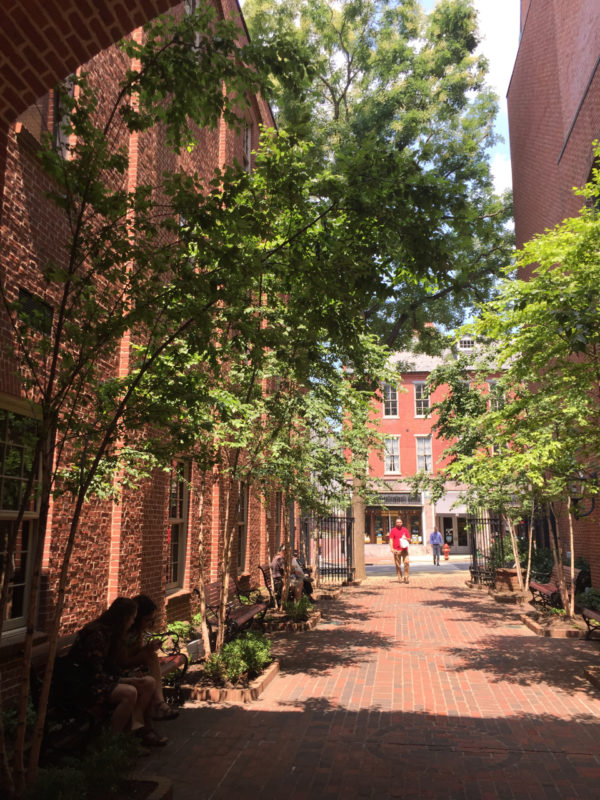 Enroute to Philly, we stopped at Brandywine Battlefield Park, site of the field headquarters used by Gen. Washington (http://brandywinebattlefield.org/). While the buildings and associated histories were fascinating, so was the presence of this ≈ 350 year old Sycamore tree. The plaque identified the tree as a living sentinel to long-ago events. Are there counterparts, to humbler events, in Worthington? 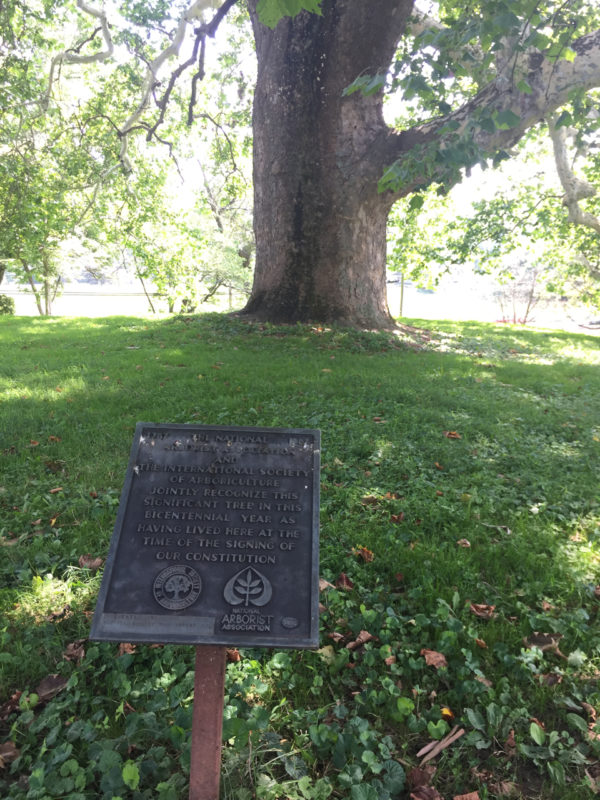 WHERE THE “GREAT ESSENTIALS” WERE MADE REAL—

Independence Hall, without a counterpart, really, anywhere in the world. I share these two pictures for their inherent worth. The tables and chairs are arrayed south to north, corresponding to the colonies themselves, where great thoughts were put on paper and then put to action.  As John Adams put it, Americans, in 1776, had “a fair opportunity to form… the wisest and happiest government that human wisdom can contrive.” We continue, even here in Worthington, to test this opportunity. 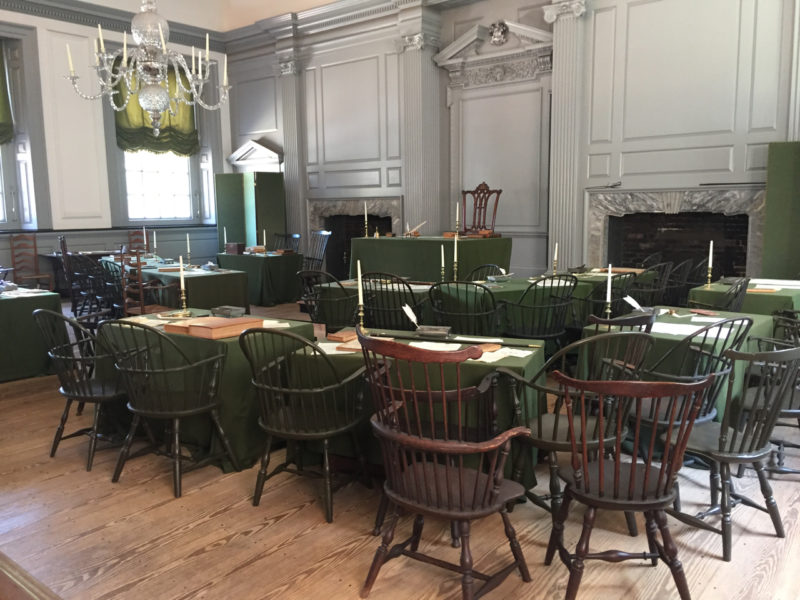 And upstairs, in the first Senate Chambers, where the new nation’s founders worked to understand and make real the Constitution they had just created: “Every word [of a constitution] decides a question between power and liberty (James Madison, 1792). 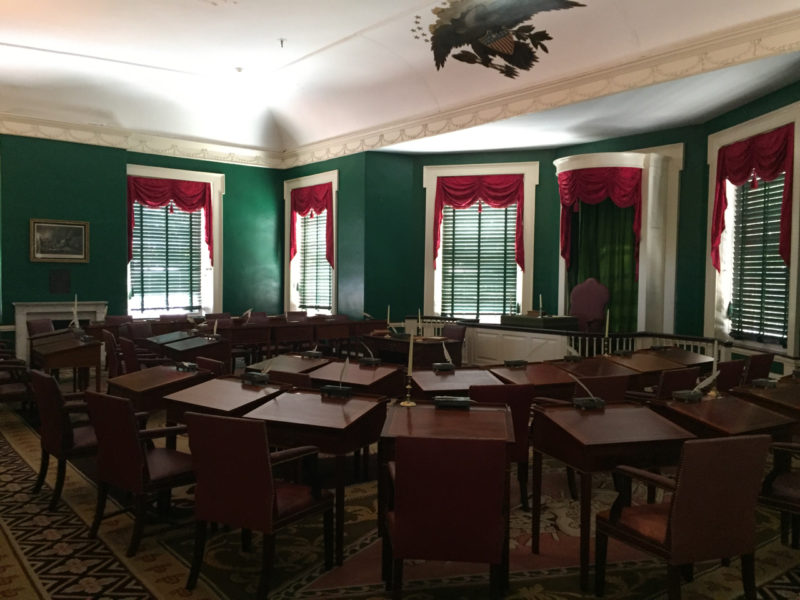 The City Tavern in Philadelphia (https://en.wikipedia.org/wiki/City_Tavern), site of great deliberations, facilitated with food and drink, was torn down and then reconstructed (opened for the bicentennial, 1976): 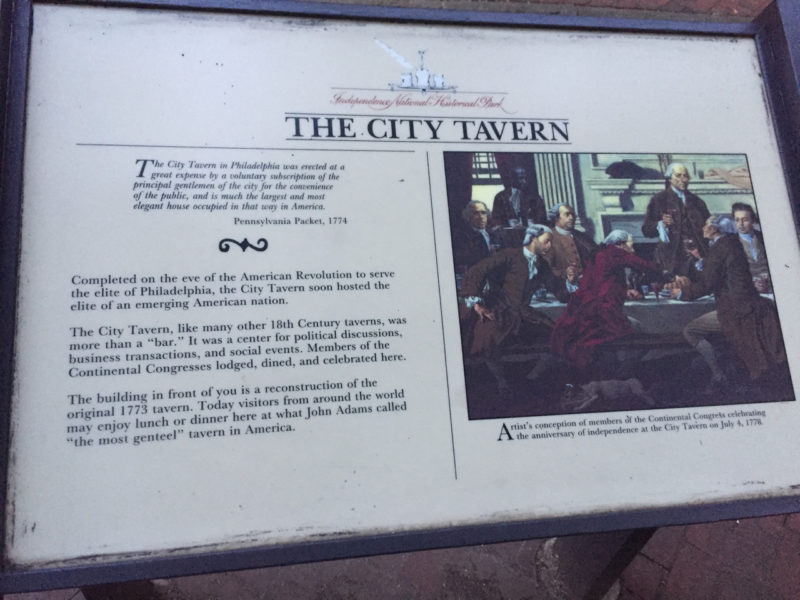 A MOST REGRETTABLE LOSS, HONORED WITH SIMPLE SPACE—

And, just across the street from the Tavern was the Slate Roof House (https://en.wikipedia.org/wiki/Slate_Roof_House), torn down in the mid-1800s, despite protest, now sits a simple park, mostly empty space as testimony to what was once there:

“It was at the Slate Roof House that he [William Penn] wrote and issued his ‘Charter of Privileges,’ a progressive framework for Pennsylvania’s government that became the model for the United States Constitution and is still the basis of free governments all over the world.” 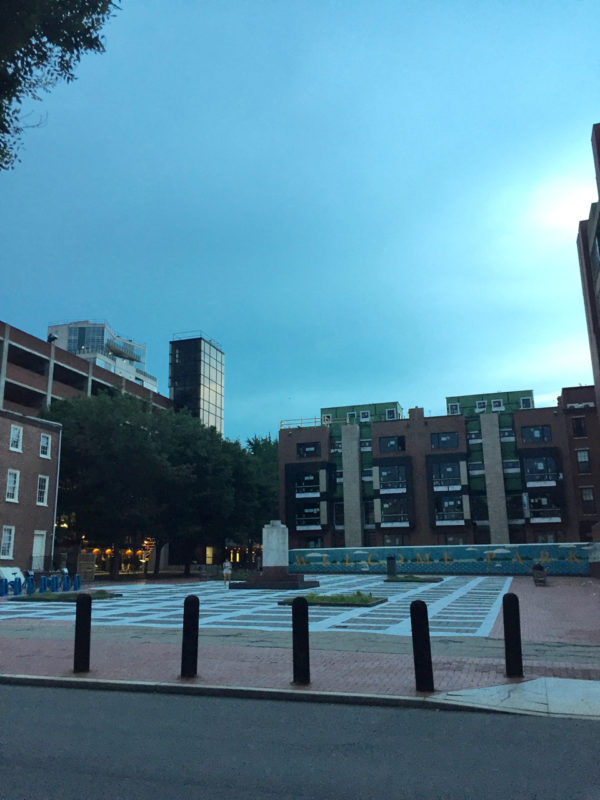 A Philly pocket park, slightly larger than a small Worthington lot, with a statue honoring, simply, “The Signer”: 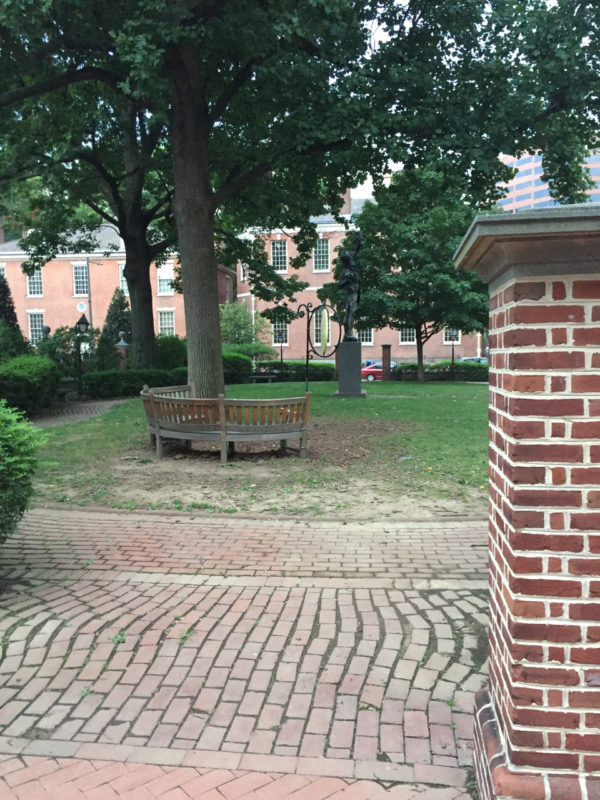 And, if I may add, with no known immediate relevance for Worthingtonians, two images illustrating the pragmatic cleverness of our forebears, taken at the Hans Herr house, the oldest homestead (1719) in Lancaster County, PA (https://hansherr.org/):

#1—to keep rats out of your stored grain, use rye to make the basket, as it is bitter and not to be chewed: 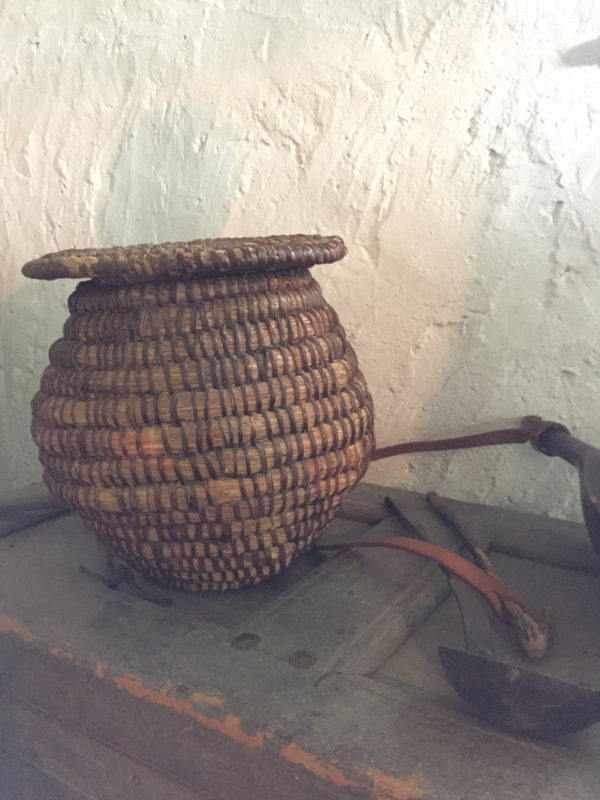 #2—and if you wish to keep toddlers and other little ones from falling down the steep cellar stairs, angle the door vertically, bottom toward you, so that it is too heavy for them to lift and open, thereby preventing a calamitous stumble; when strong enough to open, then old enough to descend: 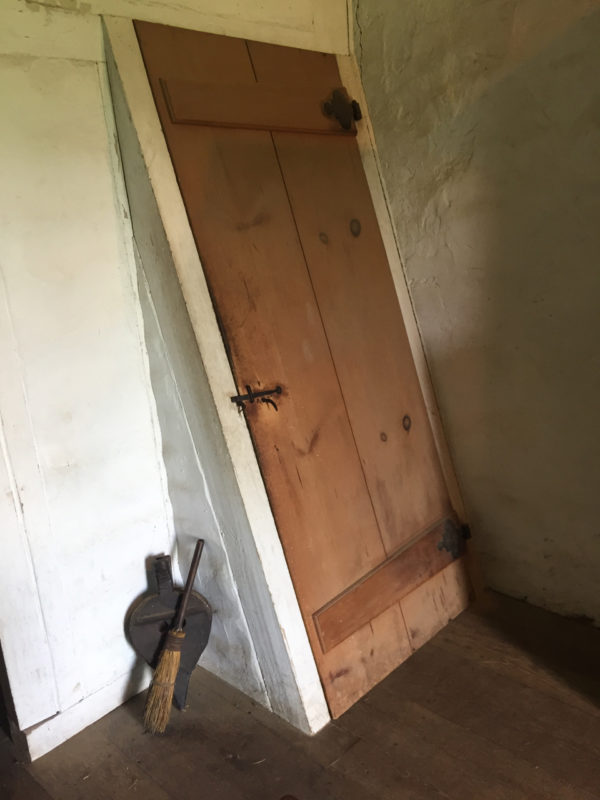